From tomorrow onwards, the card release of November 28th 2012, will not be available in the NewComer Booster. 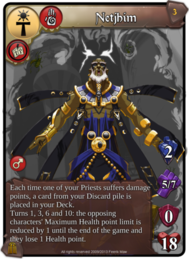 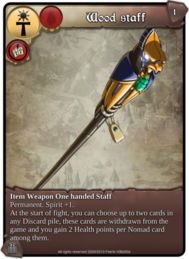 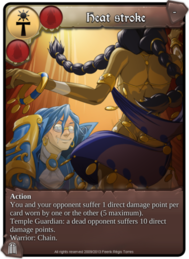 Netjhim. (3 evolutions in all). On his last evolution : Rare. Character. Desert Nomad. Priest. Human. Spirit 2. Attack 5/7. Defense 0. Health points 18. Each time one of your Priests suffers damage points, a card from your Discard pile is placed in your Deck.

Turns 1, 3, 6 and 10: the opposing characters loose 1 Health point and their Maximum Health point limit is reduced by 1 until the end of the game.

At the start of the fight, heals 1 Health point per character who has already been healed during the game.

At the start of fight, you can choose up to two cards in any Discard pile, these cards are withdrawn from the game and you win 2 Health points per Nomad card among them.

Precognition. Uncommon. Destiny Theurgy. Desert Nomads, Priest. Duration 2 fights. At the end of the fight, your opponent suffers X magic damage points where X is the sum of the Heal points received by both characters in battle this turn.

Heat stroke. Common. Action. Desert Nomads. You and your opponent suffer 1 direct damage point per card worn by one or the other (5 maximum).

Repulsion. Common. Action. Desert Nomads Duration 3 turns. If an Immortal dies, the others have Attack +3 until the end of the game.

Immortal: among the cards attached to the characters in battle, two opposing cards and one of yours are placed in their owner’s Deck.