The old ice elf gaze at this land he had never treaded. His mission was crucial, he had to find the lost ice elves and bring them back home. The world hadn’t undergone an apocalypse and the Amethyst glacier had stopped melting. The problem was, he had no idea where to start searching for them…

Participate in the event that starts today and lasts until Wednesday January 30th at noon (French time).

Through this event, a new campaign composed of 3 missions is launched.

The Ice Elfes offer you to accomplish missions and be rewarded with Amethysts and Items. These missions are in the website background:

– Each mission is worth 10 Energy points.

– Missions are unlocked on after the other.

– You get a little chance of winning 30 Amethysts at the end of each mission. The more the mission is high in level, the more chances you get of obtaining Amethysts.

– You get a chance of winning the following cards:

Hrimnir’s crown, Hrimnir’s right claws and Hrimnir’s left claws. The chances you have of obtaining these cards increase on each victory until you get the card. You can win the rewards only once.

Here are the rewards you can obtain during these missions: 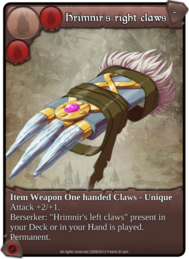 Ice Elf: “Hrimnir’s right claws” present in your Deck or in your Hand is played.

Berserker: “Hrimnir’s left claws” present in your Deck or in your Hand is played.

A shower of Amethysts

A shower of Amethysts

There are different ways to obtain Amethysts:

– At the end of the missions of The Althing campaign, you get a chance to obtain 30 Amethysts.

– You can gather Amethysts during games too. In player versus player fights, Amethysrs will appear on screen regularly. Click to gather them.

What can I obtain during this event? You can spend your Amethysts in the store to: 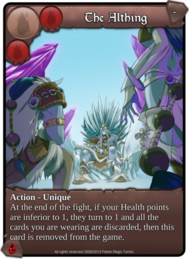 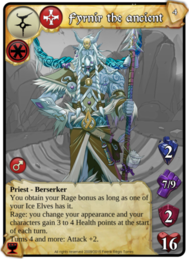 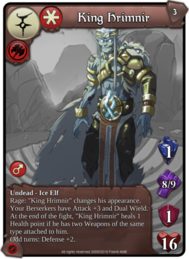 The Althing : Collector, Action, Unique. At the end of the fight, if your Health points are inferior to 1, they turn to 1 and all the cards you are wearing are discarded.

Fyrnir the ancient : Mythical, Character, Mercenaries, Priest, Berserker, Ice Elve, Male. Spirit 2. Attack 7/9. Defense 2. Health points 16. You obtain your Rage bonus as long as one of your Ice Elves has it.

Rage: you change your appearance and your characters win 1 to 2 Health points at the start of each turn.

At the end of the fight, “King Hrimnir” heals 1 Health point if he has two Weapons of the same type attached to him.