iTCG : The Ally in store

Players who haven’t completed the trophy: The Ally, can now access it from the Eredan iTCG store.

Win at least 15 Games during which you played at least 3 Jewels.
You must play against different players.

You will earn the card named Alliance and the title: The Ally. 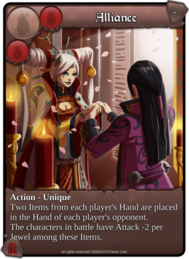 Alliance: Action. Collector. Unique. Two Items from each player’s Hand are placed in the Hand of each player’s opponent. The characters in battle have Attack -2 per Jewel among these Items.