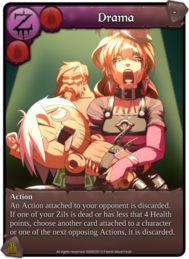 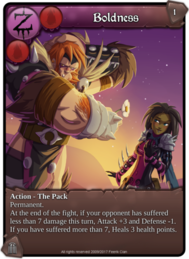 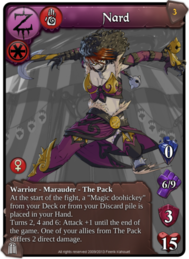 Drama. Rare. Action. Zil Warriors. An Action attached to your opponent is discarded.

If one of your Zils is dead or has less that 4 Health points, choose another card attached to a character or one of the next opposing Actions, it is discarded.

Each time you suffer more than 6 damage, your characters have Attack +2.

At the end of the fight, if your opponent has suffered less than 7 damage this turn, Heals 3 health points. If you have suffered more than 7, Attack +3 and Defense -1.

At the start of the fight, your opponent can discard up to 4 cards, if he discards 4, this card is discarded and you suffer 4 direct damage.

Nard. (3 evolutions in all). On its last evolution: Common. Character. Zil Warrior. The Pack. Warrior, Marauder. Human. Spirit 0. Attack 6/9. Defense 3. Health points 15.At the start of the fight, a “Magic doohickey” from your Deck or from your Discard pile is placed in your Hand.

Turns 2, 4 and 6: Attack +1 until the end of the game. One of your allies from The Pack suffers 2 direct damage.

Unleash the beast. Common. Action. At the end of the fight, this card is placed in the opposing Deck. Next time it is discarded from the Hand or the Deck, a non Zil character has Attack -1 and Spirit -1 until the end of the game.

Billboard. Common. Banner Item. Zil Warrior. Permanent. At the end of the fight, if you have less than 9 Health points, Attack +1 and your characters from The Pack have Attack +1.