iTCG: Last Tournament before the End of the World

You have until Wednesday December 26th 2012 at noon (French time), to take part in this trophy, after that it will not be available anymore (the world will have ended by then!)

This free tournament offers you a new way to compete. When you register, you receive a Deck picked at random among the 8 Eredan iTCG guilds.

– You can only play it during the tournament.

– It cannot be edited nor deleted.

– You will also get 15 Coins of values that you can use to buy another free deck from the Apocalypse store.

– Each time you play a card from the Deck specially made for the tournament, it stays in game but it cannot be used for the next fights. Therefore your Deck will empty little by little.

– The Deck becomes unplayable when it contains less than 20 cards (characters exclusive).

– You obtain a Coin of value when you gain a victory having played 6 cards or more.

– The cards played will not be deleted if your opponent leaves the game before you have played at least 6.

Here are the lots at stake for the tournament:

What can I win during this event?

You can spend your Coins of value in the Apocalypse store to:

– Buy one of the eight tournament Decks worth 15 Coins of value.

– Buy the Cataclysm card worth 50 Coins of value.

Cards and trophies for the event

Attack +3 and Defense +1 for each one of your dead Allies.

At the end of the turn, you loose the game. 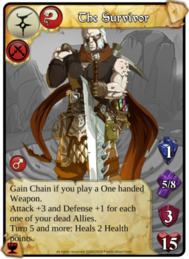 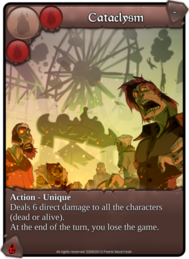