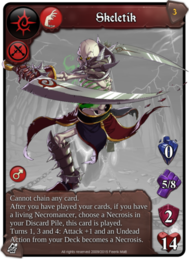 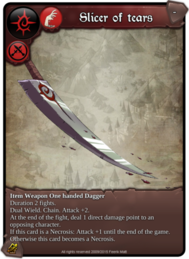 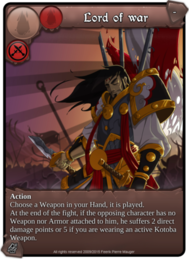 Slicer of tears. Rare. Dagger. Nehantist. Undead. Warrior. Duration 2 fights. Dual Wield. Chain. Attack +2. At the end of the fight, deal 1 direct damage point to an opposing character. If this card is a Necrosis: Attack +1 until the end of the game. Otherwise this card becomes a Necrosis.

Skeletik. (3 evolutions in all). On its last evolution: Common. Nehantist. Warrior. Undead. Spirit 0. Attack 5/8. Defense 2. Health points 14. Cannot chain any card. After you have played your cards, if you have a living Necromancer, choose a Necrosis in your Discard Pile, this card is played. Turns 1 and 4: An Undead Action from your Deck becomes a Necrosis.

Exhumation. Uncommon. Action. Nehantist. Undead. One of your Undead (dead or alive) who has less than 4 Health points Heals 6 to 8 and 3 Undead Actions in your Discard pile that are not Necroses become Necroses.

Lord of war. Uncommon. Action. Warrior. Choose a Weapon in your Hand, it is played. At the end of the fight, if the opposing character has no Weapon nor Armor attached to him, he suffers 2 direct damage points or 5 if you are wearing an active Kotoba Weapon.