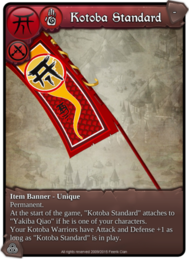 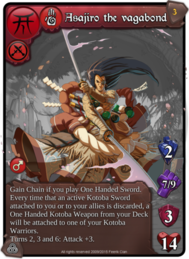 Yakiba Qiao (3 evolutions in all). On its last evolution: Rare. Kotoba. Warrior. Human. Male. Spirit 1. Attack 6/9. Defense 3. Health points 15. Gain Chain if you play a One handed Weapon. The One handed Kotoba or Warrior Weapons played by your characters activate immediately. Turns 1, 3 and 5: One “Daikatana” of your Deck or Discard pile is played after your cards.

Kotoba Standard. Uncommon. Bannier. Unique. Kotoba. Warrior. Human. Permanent. At the start of the game, “Kotoba Standard” attaches to “Yakiba Qiao” if he is one of your characters. Your Kotoba Warriors have Attack and Defense +1 as long as “Kotoba Standard” is in play.

Asajiro the vagabond (3 evolutions in all). On its last evolution: Rare. Kotoba. Warrior. Human. Male. Spirit 2. Attack 7/9. Defense 3. Health points 14. Gain Chain if you play One Handed Sword. Every time that an active Kotoba Sword attached to you or to your allies is discarded, a One Handed Kotoba Weapon from your Deck will be attached to one of your Kotoba Warriors. Turns 2, 3 and 6: Attack +3.

Weapon Throw. Rare. Action. Kotoba. Warrior. Choose a Weapon attached to your character, this card is then discarded. Choose an opposing character, your character deals an immediate Physical Attack against the latter instead of his Normal Attack if a Weapon is discarded by the effect of this card. Chain.

Imperial Guard Armor. Common. Armor. Kotoba. Warrior. Permanent. Defense +4. If a Weapon is active, a playable One Handed Kotoba Weapon from your Discard Pile is played. Chain One Handed Sword.