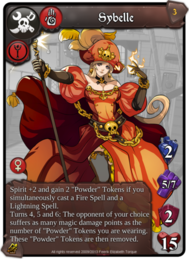 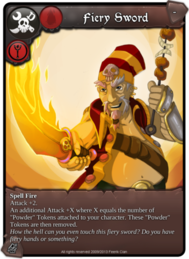 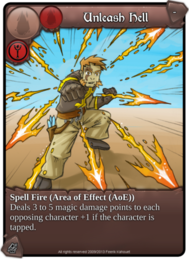 Sybelle. (3 evolutions in all). On its last evolution : Rare. Pirates. Mage. Human. Spirit 2. Attack 5/7. Defense 2. Health points 15. Spirit +2 and gain 2 “Powder” Tokens if you simultaneously cast a Fire Spell and a Lightning Spell. Turns 4, 5 and 6: The opponent of your choice suffers as much magic damage points as the number of “Powder” Tokens you are wearing. These “Powder” Tokens are then removed.

Fiery Sword. Uncommon. Fire. Pirates. Mage. Attack +2. An additional Attack +X where X equals the number of “Powder” Tokens attached to your character. These “Powder” Tokens are then removed.

Unleash Hell. Uncommon. Fire. Mage. Deals 3 to 5 magic damage points to each opposing character +1 if the character is tapped.

Flash for Ward. Common. Lightning. Pirates. Mage. One copy of this card per character only. Duration: 2 Turns. All the other characters have Attack -3. At the start of the next Turn, this penalty is reduced by 1.