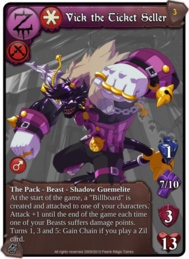 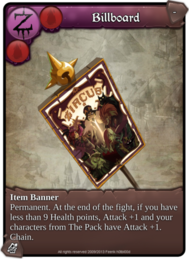 Vick the Ticket Seller. (3 evolutions in all). On its last evolution : Uncommon. Zil Warriors. Warrior. Beast, Shadow Guemelite . The Pack. Spirit 1. Attack 7/10. Defense 3. Health points 13. At the start of the game, a “Billboard” is created and attached to one of your characters. Attack +1 until the end of the game each time one of your Beasts suffers damage points. Turns 1, 3 and 5: Gain Chain if you play a Zil card.

Billboard. Common. Banner. Zil Warriors. Permanent. At the end of the fight, if you have less than 9 Health points, Attack +1 and your characters from The Pack have Attack +1. Chain.

Fighting dagger. Common. Dagger. Zil Warriors. Duration 6 turns. Dual Wield. Attack +1. If this card is removed from the game because of the effects of another card, an opposing character suffers 2 to 3 direct damage. Marauder: at the start of the fight, Attack +1 per dagger in game.