From tomorrow onwards, the card release of November 21st, will not be available in the NewComer Booster. 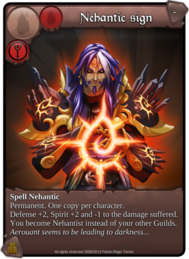 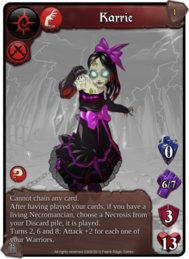 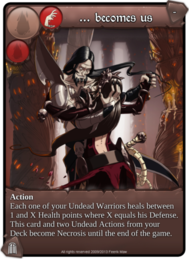 If this card is a Necrosis or if your next card is “…becomes us”, choose an Undead Action from your Hand, it is played.

This card becomes a Necrosis until the end of the game.

Defense +2, Spirit +2 and -1 to damage points suffered. You become Nehantist instead of your other Guilds.

After having played your cards, if you have a living Necromancian, choose a Necrosis from your Discard pile, it is played.

Submerge. Uncommon. Action. Nehantists.Duration 3 turns. Choose a character and attach this card to him.

The holder has Attack +2 per Demoniac Servant Pet in play and your suffer 3 direct damage points.

Edrianne. (3 evolution, in all). On her last evolution: Common. Character. Nehantist. Mage. Human. Spirit 2. Attack 4/6. Defense 2. Health points 14. At the start of the fight, choose a character, for each Corruption he wears, 1 Nehantic Spell from your Discard pile is placed in your Deck (3 maximum).

Turns 4 and 6: Defense +2 and one of your allies heals 1 Health point.

Blackness . Common. Action. Nehantists. Permanent. This card is attached to your opponent and becomes a Demonic Servant Pet.

Each time a holder’s ally suffers damage points not dealt by “Blackness”, the holder suffers 1 to 2 direct damage points.

… becomes us. Common. Action. Undead. Each one of your Undead Warriors heals between 1 and X Health points where X equals his Defense.

This card and two Undead Actions from your Deck become Necrosis until the end of the game.