From tomorrow onwards, the card release of November 14th, will not be available in the NewComer Booster. 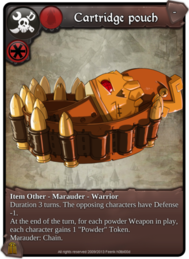 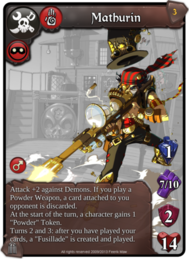 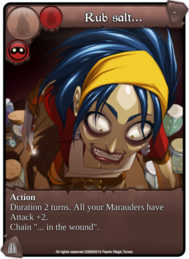 Cartridge pouch. Rare. Other Item. Pirates, Marauder, Warrior. Duration 5 turns. The opposing characters have Defense -1. At the end of the turn, for each powder Weapon in play, a character gains 2 “Powder” Tokens. Marauder: Chain.

Mathurin (3 evolutions in all). On his last evolution: Uncommon. Character. Pirates, Marauder, Human. Spirit 1. Attack 7/10. Defense 2. Health points 14. Attack +2 against Demons. If you play a Powder Weapon, a card attached to you opponent is discarded. At the start of the turn, a character gains 1 “Powder” Token. Turns 2 and 3: after you have played your cards, a “Fusillade” is created and played.

Puncher. Uncommon. Powder 2 Handed Weapon Item. Pirates, marauders, Warrior. Permanent. Choose an opposing character, he has Defense -3. At the start of the fight, he suffers 4 physical damage points +1 per “Powder” token he is wearing (+3 maximum).

Plunder. Common. Action. Marauder. If your opponent wears no Item, he has Attack -2, otherwise one of his Items is discarded and an Item from your Deck is placed in your Hand. Chain.

Rub salt… . Common. Action. Marauder. Duration 2 turns. All your Marauders have Attack +2. Chain “… in the wound”.

… in the wound. Common. Action. Marauder. Attack +1 to Attack +2 for each one of your Marauders who has an Attack bonus superior to 1.