From tomorrow onwards, the card release of September 26th, will not be available in the NewComer Booster. 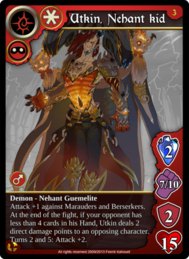 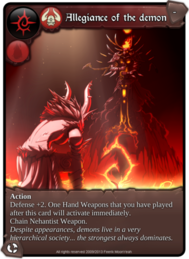 At the end of the fight, if your opponent has less than 4 cards in his Hand, Utkin deals 2 direct damages to an opposing character.

The character has Attack -5 during the fight when this card activates, then Attack -2 at the end of this fight.

Eredan’s wisdom (2 evolutions, in all). On his last evolution: Rare. Staff Item. Unique. Permanent. Defense +2, Spirit +2 and +2 to magic damages of (non- AoE) Spells played by your character.

At the end of the fight, if “Ciramor” is in play, he becomes Noz and this card is attached to him.

NB: Eredan’s wisdom is the evolution of Eredan’s cursed wisdom. It needs a particular trophy : The Destiny of the Guardian to evolve. What’s more, the cards that are necessary for its evolution had been removed from the market.

Forbidden Nehantic books. Uncommon. Magic Book Item. Nehantists. Permanent. At the end of the turn, a card is picked in each Discard pile and withdrawn from the game.

As this card activates and at the start of the fight, the opposing character has Defense -2 and Spirit -2 and you suffer 3 direct damages.

Hesitation. Uncommon. Action. Nehantists, Marauder. Permanent. Your other “Hesitation” cards in play are discarded. You opponent draws one card less during the next draw phases.

At the start of the fight, Attack +3 until the end of the turn if your opponent has played less than 2 cards.

One “Desolation of the Heart” from your Hand is played.

Allegiance of the demon Common. Action. Nehantists, Demon. Defense +2. One Hand Weapons that you have played after this card will activate immediately.

If “Break the first chain”, “Break the second chain” and “Break the third chain” have been activated in that order during the game, the maximum is 666.

Choose one of your tapped characters, he gets untapped.