Al Killicrew, the new Bramamir ruler is backed up by the Phoenix. He protects her to the point that no one will ever manage to kill her as long as he watches over her. Around her, craftsmen, mages and marauders expand their domination over the White Islands. 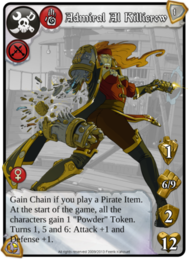 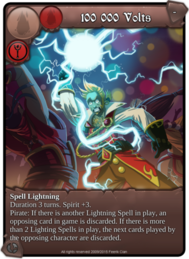 Admiral Al Killicrew. (and her two evolutions). Legendary. Character. Pirates. Warrior. Human. Female. Spirit 1. Attack 6/9. Defense 2. Health points 12. Gain Chain if you play a Pirate Item. At the start of the game, all the characters gain 1 “Powder” Token. Turns 1, 5 and 6: Attack +1 and Defense +1.

Burning fire . Rare. Action. Pirates, Marauder. Attack +3/+1. If your next card is a One handed Weapon, the last Powder Weapon in your Discard pile is played. Chain Powder Weapon.

Blessing of the Phoenix . Rare. Fire Spell. Pirates, Mage. One copy per character. Duration 4 turns. Attack +3 and Spirit +2. Each time your character suffers damages, if he gets below 1 Health point, an opposing character suffers 8 magic damages.

Sparkling . Uncommon. Action. Pirates. As this cards activates your character loses up to 6 “Powder” Tokens and has Defense +1 until the end of the fight for each Token lost. At the start of the fight, he gains 2 “Powder” Tokens. Permanent. Chain.

100 000 Volts . Uncommon. Lighting Spell. Mage. Duration 3 turns. Spirit +3. Pirate: If there is another Lightning Spell in play, an opposing card in play is discarded. If there is more than 2 Lighting Spells in play, the next cards played by the opposing character are ignored.

Pirate party. Uncommon. Action. Pirates. Duration 2 turns. All your Pirates have Defense +3 plus, Attack +3 for those who have a “Powder” Token attached to them. At the end of the 2nd turn, all your Pirates suffer 1 to 2 direct damages.

Tar and feathers. Uncommon. Action. Pirates. Choose a character, he gains 4 “Powder” Tokens. If it is one of your characters, he heals 3 Health points. If not, he has Attack -2 and Spirit -2 until the end of the game.

Everyone knows that the Noz’Dingard Envoys master magic more than anyone in Guem. All the upper crust specialists are part of the Compendium, and they prove it again, this week with the arrival of Blanche of Arcancia, a young noble lady but also with new spells that enable them to make the most of magic, even that of their opponents. For the tasks which are a bit more… direct… the witchblades know how to associate steel and magic spirit! 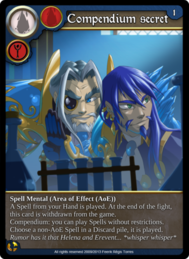 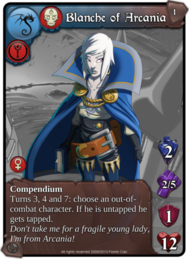 Witchblade secret. Rare. Action. Noz’Dingard Envoys, Witchblade.The next card played by the opposing character is ignored unless it is a Marauder or a Spell card. Chain Noz Action.

Compendium secret. Rare. Mental Spell. Mage. Spirit +1. At the end of the fight, this card is withdrawn from the game. Compendium: your character can play Spells and ignore their prerequisites. Choose a Spell from one of the Discard piles, it is played.

The dance of the blade. Uncommon. Les Noz’Dingard Envoys, Marauder. Duration 2 turns. Attack +X where X equals your character’s Spirit (5 maximum). Defense +2 for each Witchblade who was has a Weapon or an Armor attached to her.

Magic-proof. Uncommon. Action. Warrior, Marauder. Duration 2 fights. As this card activates, discard up to 5 cards, your character has -1 to the magic damages his suffers for each card you discard unless he is a Golem.

The Art of magic. Uncommon. Light Spell. Noz’Dingard Envoys, Mage. Each opposing character suffers 4 magic damages, +2 if at least 3 other Spells are in play. Your Compendium have Defense +1 until the end of the game.

Blanche of Arcania. Uncommon. Character. Noz’Dingard Envoys. Mage. Dragon Guemelite. Compendium. Female. Spirit 2. Attack 2/5. Defense 1. Health points 12.Turns 3, 4 and 7: choose a character out of combat. If he is untapped he gets tapped.

Water wave. Common. Water Spell. Noz’Dingard Envoys, Mage.The opposing character suffers 6 to 8 magic damages.
Compendium: choose a character out of combat. If he is untapped he gets tapped and if he is tapped he gets untapped.

Nick. Common. Action. Marauder. The character has Defense -1 until the end of the game. Chain Action or Item.

Caution : For once, their will be no guild battle associated to this card release. See you tomorrow for more information about this news!