CLAP – CLAP !
(Onomatopoeia of water clapping on the riverbank)

This week’s update will be lighter than the previous patch!

We want you to have the feeling that the world you evolve and fight in is a lively one, where the jungle looks inhabited by monsters, where mercenaries have a past and strong motivations. In short, we want you to enjoy the arena, and to take pleasure in going back to it! For these reasons, we keep improving the visual quality of the Collapsed Realms. In addition to this, we partly reveal the story behind each character, shedding light on the adventures they lived before entering the arena.

Besides, we carry on releasing new Spells and improving your Collection. 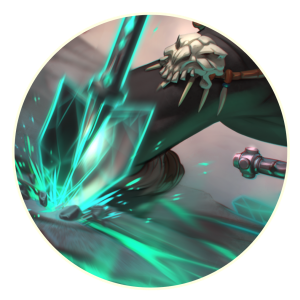 Don’t believe that every mercenary wandering the Collapsed Realms strives to get back home. There are some, like me, who feel very happy where they are.

We release three new spells, one Common and two Rare! You can find them in the Chests:

NEW MINES (Rare) – This spell replaces the attack of buildings with exploding mines. Upgrading the spell increases the number of mines exploding in the area.

RAMPART – The shield icon didn’t always disappear once the effect of the spell ended, which could then give the impression that Rampart was ineffective. The bug has been corrected.

NEW COMING TO LIFE – We brought a new level of depth to the whole map by adding shadows on the bushes, buildings and rocks, but also by raising the height of walls and changing the texture of the ground in the base. New effects highlight the destruction of buildings and the characters’ movements. And if you take a closer look, you may see fireflies living in the bushes and clouds passing above the battlefield!

NEW JUNGLE – Jungle camps were formerly marked by symbols of their powers. We replaced them with the monsters themselves, in a smaller, more compact version!

NEW TIME – The timer has been reworked to match the visual style of BAClash and has also become more fluid.

NEW BOOSTER – Boosters have a new appearance that better fits the rest of the map.

NEW BELONGING TO A SIDE – The battlefield now slightly displays the color of your side to help you find your way back to base!

NEW SPELL ACTIVATION – A new notification warns you when your spells or the opponent’s are activated.

FLUIDITY OF MOVEMENT – Movements performed during the opponent’s turn used to be twitchy sometimes. We looked at the factors giving this impression and solved the issue.

NEW REPLACING A QUEST – When you decide to change quests because you don’t have the necessary mercenary to complete them, you are sure to find a quest that involves one of the mercs you possess.

NEW NOTIFICATIONS – Thanks to a notification on the home screen map, you are warned when a mercenary can be assigned to the opening of a chest. You are also informed when a new quest can be completed.

NEW COMPETITION – A tab at the top left of the home screen permanently displays your progression in the rankings.

NEW ONLINE ALLIES – You can see how many members of your clan are online by accessing the chat screen.

MERCENARY DESCRIPTIONS – We also reintroduced illustrations of the mercs, as well as our tips to maximize their potential during a game.

NEW POSITION INDICATION – You can see your position in the clan and player rankings thanks to a better display of your nickname.

STORE – We corrected a bug that didn’t allow to open the in-game shop by tapping the menu button.

FLAGS – Selecting location flags in the clan tool has been enabled again.

CHAT – The chat scrolling no longer “dances” when you attempt to donate a spell or to read an older message.

NEW GAME LOADING – Launching the game takes less time thanks to a new loading screen and the removal of the “Slide to play” feature. Loading games has also been made faster thanks to new and lighter images.

NEW TUTORIAL – You can skip tooltips by tapping the “Skip” button. Help is still available at all times thanks to a button at the bottom left of the screen. The help will display the last tooltip opened during the game.

This entry was posted in BAClash, and tagged biotope, patchnote, version. Bookmark the permalink.