Esotrod: the craft of metal, fire and electricity

The bottom of the valley had somehow been invaded by a narrow jungle, squeezed between two rocky mountains. The luxuriant vegetation, creeping and colorful, could easily compete in height with several buildings, and its top disappeared in a thick and milky layer of fog. No movement could have betrayed the presence of a living soul  in this oppressive place, stifled by the heat and humidity.

Suddenly, a sinister crack echoed through the jungle, resonating across the surrounding mountains. A flock of birds rose from the fog, spreading the chaotic noise of their flapping wings. The exact trees they were resting on a second ago bent and resoundingly crashed to the ground. Something below seemed to carve a rough passage for itself in the forest, apparently panicked like a wild beast blinded by pain.

The thing, impressively huge,  appeared to be an aggregate of metal and electricity, a mechanical sphere thrown at full speed. The grinding noise of its joints could be heard every time it hit a rock or a tree, which were instantly pulverized by its mass. Behind the thing, the burnt out and devastated vegetation left a wide open hole in the jungle. It carried on like this for a while, struggling more and more, loosing speed, until a new obstacle rose, this time impassable. The metallic shell had reached the end of a plateau giving way to an abyssal hole. It wouldn’t be able to cross it.

Esotrod stopped then. A head and limbs stretched out of his shell with great difficulty, the giant was obviously wounded. His armor bore wide rips from which electrical fire was pouring. He was losing a great amount of energy and his pursuer wasn’t far away anymore, he knew that. A whistle resounded. A faint vibration through the air alerted Esotrod, a reflection on the foliage…  He rolled over to dodge the razor-sharp shards swooping right on him. Some crystals stuck in the ground with a piercing sound, but others hit their target. Esotrod let out a grunt as they penetrated his protection, tearing it up as if it was nothing more than common paper.

Once the deadly rain of projectiles stopped, a few seconds of silence went by before the scattered shards started  to shiver, as if they were attracted to an invisible force at the center of the plateau. The dust on the ground was rising in the air, forming whirlwinds. The shards then followed the same behavior, progressively recreating a living organism. Esotrod helplessly witnessed the materialization of the glass colossus Orbital.

A light breeze  lifted the veil hanging at the window. Thin dust entered through the opening and swirled in the air, illuminated by a ray of light. A spray of freshly cut flowers had been left on a basic coffee table next to the bed. Someone must have been taking care of this room regularly. A child was laying on the blanket. He was frail and his pale face expressed exhaustion. His cheeks, which had been well-rounded in the past, were now hollow. An iron medallion engraved with a red symbol rested on his chest, which heaved at a steady pace.

A man was watching over him. He seemed considerably anxious, swinging back and forth on his chair. His eyes were continuously moving from the child’s face to his hand, and he was mumbling a constant stream of words. “…you shouldn’t have interfered, no, no, that wasn’t right, you shouldn’t have, but you have a big heart, and a good one, and it was hurting you, oh yes, seeing how he was treating us hurt you, but it wasn’t right, no, no, you should have let him get what he wanted…”

Esotrod and the glass colossus had engaged in a final fight. The sound of their relentless struggle was echoing through the jungle. The air was filled with electricity, heavier than ever. The two competitors were breathing with difficulty, both affected by the ambient humidity. Esotrod got back on his feet and gathered what he had left of energy, solidly standing on his metallic legs. The mass of fire and electricity flowing through him became unstable and dangerous. His body was covered with strange plaques, the symbols engraved on them started to glow with a violent red light. All of a sudden, his plates ejected themselves and revealed  powerful claws linked to chains, which flew towards the crystal creature. They caught their prey and gripped it solidly. Orbital tried to struggle, his crystals whirling around the giant and lashing him, but Esotrod held on and slowly pulled his opponent towards himself. His legs wouldn’t be able to carry on for long. At any moment, they could collapse under the weight of this last effort.

The flying shards then stopped, frozen in the air. Orbital had quit struggling. He exploded at once, scattering his crystals all over the place, and Esotrod’s claws ended up holding nothing but air. His enemy’s glass head landed nearby…

At the same moment, Esotrod felt his strength leaving him. He felt such a pain that his claws weakly fell on the ground. His body seemed unbearably heavy to him, as if it couldn’t carry its own weight anymore. He had the impression to be squeezed, that every part of his body was about to explode under the pressure. The giant collapsed and wouldn’t rise anymore. The metallic carcass let out a final hollow moan and the redness of its glow faded. Esotrod tried to pull his chains back, but only managed to make them shiver. Without energy to move them, they had become useless. His glow died completely.

In the room, the eyes of the little boy suddenly opened and rolled upwards. The man at his side jumped up and leaned over the child’s face. The stream of his words intensified. “…oh, you shouldn’t have, no, you wanted to protect us and this is what he did to you,  oh my boy, will you wake up one day, but it’s my fault, yes, my fault, my poor leg, I couldn’t, I should have stopped him from lashing out at you, I should have, I couldn’t stop him, oh my boy, forgive me, I couldn’t…”

As the fog closed in on Esotrod and Orbital’s lifeless figures, the ground started to tremble once again. A tornado of dust soon rumbled and encircled them. The earth cracked and suddenly opened in two, swallowing them into the deepness.

The man’s groan had amplified. He was now screaming. The door of the room opened and an old woman stepped inside. Her eyes fixed for an instant upon the child before she went towards the man. She put a hand on his back: 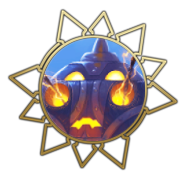 “Come, Theo. Whatever monsters your son confronts in his sleep, there’s nothing you can do to help him. You know him. Even in the Collapsed Realms, he will keep on protecting the companions he will find, as he did for us. But he’s not alone. Our family’s knowledge is with him. Who knows what form he took there… He will come back to us, our Theo, he will get out of his coma. Don’t lose hope.”