Aether: the tormenting spirit and the Five Links

Aether opened her eyes. It was time. Today marked two years to the day, since the fourth member of the Five Links had taken the leap. He hadn’t come back. It was her turn. She rose out of the stiff bed she had spent the night in and walked barefoot on the stone tiles,  towards the departure room. Dust rose with each of her footsteps. She heard the sound of flapping wings somewhere in the distance, under the roof of the burned-down cathedral where they had set up their camp, years before. Daylight leaked through the shattered windows as she stepped over the ruins of toppled columns that laid across the floor.

Aether still carried the scars of her commitment to the companionship. Her long, white hair was proof of the tests she had to endure to prove herself worthy. Her hands, burned by poured acid, were a stark reminder to stay determined. She had not given them the names of her companions. She could walk with her head held high.

Once arrived at her destination, she grabbed hold of the two sleeves which had been thrown over the wooden doors. She put them on and attached them to her dress as she entered the room. Her scars now covered, she adjusted her metal shoulder pads, which had been hanging on the wall. She stood in front of a large metal table in which abstract patterns had been carved, illuminated by a strange half-gas, half-liquid blue material. The branches of the pattern converged towards an object in the center of the table. The artifact, which seemed to be the source of the substance, was made of the same material as the table and had four round openings on each of its four sides.

Aether carefully placed her left hand over the tetrahedron. Instantly, the blue material violently retracted back into the object, which rose above the table, shaking violently. The object suddenly released a burst of pale, blinding light which enveloped the entirety of the room. The blast opened Aether’s eyes wide, which were entirely milky white… When she was able to close them again, she took a deep breath and felt her right hand vibrating at the same pace as her tetrahedron. She looked at it from the corner of her eye: an electric blue fluid now flowed from her palm, connected with the object which still levitated in her left hand.

A faint smile appeared on her face. She was ready for the journey. Aether turned around. Four other identical tables were placed in a circle in the room. Three of them were extinguished, an empty space in the center for each artifact. The fourth had been destroyed as if struck by lightning, its metal shards scattered across the floor.

Aether was the Master of Servitude within the Five Links. She would be the next one to travel to the world of the “Collapsing Realms”. She would follow their path and take revenge against those who had destroyed her companionship.

She moved to the center of the room, stood on a round, slightly elevated tile, and a powerful mechanism got in gear, trembling the already worn walls. Throughout the room, a deafening sound took over. Aether’s magic began to swirl around her from her palm to the tetrahedron, forming a powerful protective shell. The flux split into four other branches which plunged into the ground and connected the tables, flooding their carved channels with magic. Aether winced in pain.

She would punish the weak souls, incapable of putting up a fight against her. She would avenge Ethran and would find a way to contain all the wisdom and science of the Collapsing Realms. So that the Five Links could be reunited in all their glory once more. 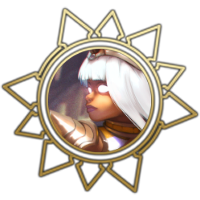 When the walls stopped trembling and the quiet returned, Aether had disappeared. And somewhere, in a lost and immense plane, eight mercenaries appeared in their bases.