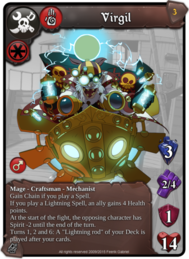 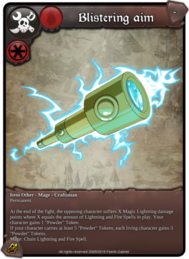 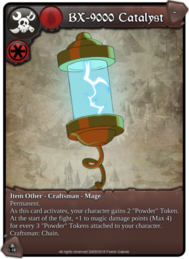 Virgil. (3 evolutions in all). On its last evolution: Uncommon. Pirates. Mage. Craftsman. Human. Mechanist. Spirit 3. Attack 2/4. Defense 1. Health points 14
Gain Chain if you play a Spell. If you play a Lightning Spell, an ally gains 4 Health points. At the start of the fight, the opposing character has Spirit -2 until the end of the turn. Turns 1, 2 and 6: A “Lightning rod” of your Deck is played after your cards.

Rocketor. Common. Other Item. Pirates. Craftsman. Warrior. Marauder. Mage.
As this card activates and at the start of the fight, if at least 7 “Powder” Token are attached to your character, an opposing character suffers X magic Fire damage points where X equals the amount of “Powder” Token attached to the target. These “Powder” Tokens are then removed (max 8). Duration 3 Turns.