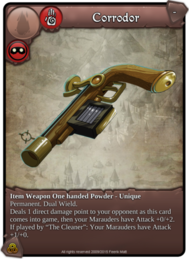 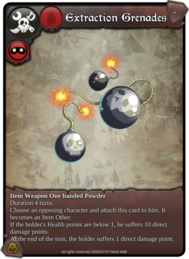 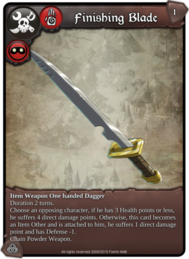 Extraction Grenades. Rare. One handed Powder Weapon. Pirates. Marauder. Duration 4 turns. Choose an opposing character and attach this card to him. It becomes an Item Other. If the holder’s Health points are below 1, he suffers 10 direct damage points. At the end of the turn, the holder suffers 1 direct damage point.

Finishing Blade. Uncommon. Dagger. Maraduer. Pirates. Human. Duration 2 turns. Choose an opposing character, if he has 3 Health points or less, he suffers 4 direct damage points. Otherwise, this card becomes an Item Other and is attached to him, he suffers 1 direct damage point and has Defense -1. Chain Powder Weapon.