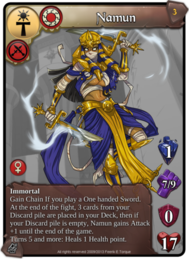 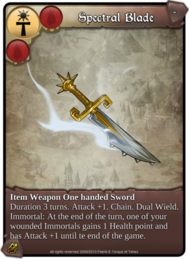 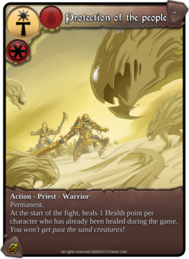 Spectral Blade. One handed Sword. Nomad. Duration 3 turns. Attack +1. Chain. Dual Wield. Immortal: At the end of the turn, one of your wounded Immortals gains 1 Health point and has Attack +1 until the end of the game.

Namun. (3 evolutions in all). On its last evolution: Uncommon. Nomad. Warrior. Immortal. Solarian. Spirit 1. Attacke 7/9. Defense 0. Health points 17. Gain Chain If you play a One handed Sword. At the end of the fight, 3 cards from your Discard pile are placed in your Deck, then if your Discard pile is empty, Namun gains Attack +1 until the end of the game. Turns 5 and more: Heals 1 Health point.

Guem tear . Rare. Unique. Jewelry. Nomad. Heals 2 to 3 Health points. At the start of each Turn, one of you characters heals 1 Health point. Permanent.

Protection of the people. Rare. Action. Nomad. Warrior. Priest. Permanent. At the start of the fight, heals 1 Health point per character who has already been healed during the game.

Istaryam Blade. Uncommon. One handed Sword. Nomad. Immortal. Attack + 2. Permanent. Every 3 Turns your character has an additional Attack + 1 and heals 1 Health point. Turn 5 and more: At the start of each fight, a card of the opposing Discard pile is removed from the game.