Many legends are told all around the kingdom of Yses, but only few thereof are as disturbing as the legend of Noth, the Mage-Killer. It’s not always easy to believe in a legend, but the legend of Noth is partially linked with the one of Knight Kaes.

After her homeland has been distructed by a shower of magical flames, the annihilation of magic became her new life purpose.
Her journey took Noth through whole Yses, building up her reputation as killer of Mages. Legend has it that her way led her to a battlefield bigger than one can imagine. Destiny led her to a place with more magic than Noth had ever come across, the fields of the Big Tournament and Kaes’ interior duel.

Unintendedly sucked up into a battle that didn’t concern her, Noth had to choose a side… or destroy them all! The guilds are split up in 2 sides, each fighting for opposing valors.

There is a series of 4 repeatable trophies for each side which will allow you to obtain 100 of Kaes’ Reveries.
Complete each series once to get the card “Resentment”, trusty blade of Noth, as well as the associated trophy. 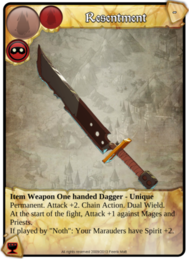 We have set up a store specially for this event, The store of the Muser, in which you will find various items. 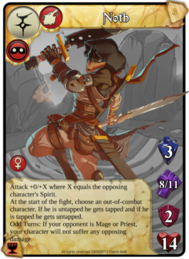