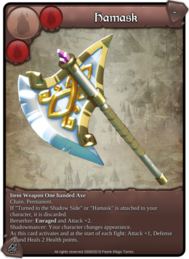 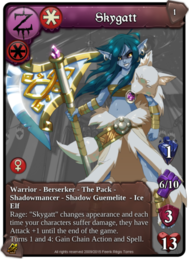 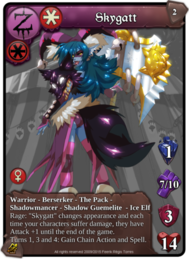 Skygatt. (3 evolutions in all). On its last evolution: Rare. Zil. Warrior. Berserker. Shadow Guemelite. Ice Elves. The Pack. Shadowmancer. Spirit 1. Attack 7/10. Defense 3. Health points 14. Rage: “Skygatt” changes appearance and each time your characters suffer damage, they have Attack +1 until the end of the game. Turns 1, 3 and 4: Gain Chain Action and Spell.

Hamask. Uncommon. Axe. Chain. Permanent. If “Turned to the Shadow Side” or “Hamask” is attached to your character, it is discarded. Berserker: Enraged and Attack +2. Shadowmancer: Your character changes appearance. As this card activates and at the start of each fight: Attack +1, Defense +1 and Heals 2 Health points.

The following cards are reeditions of older cards:

Kokrem. (3 evolutions in all). On its last evolution: Uncommon. Mercenary. Berserker. Ice Elves. Spirit 1. Attack 7/9. Defense 1. Health points 16. At the start of the game, an “Icy Aura” from your Deck is attached to one of your Ice elves selected at random. Rage: “Kokrem” changes appearance and your Ice elves gain Attack +1. Turns 2 and 6: Attack +3, Defense -1 and Spirit -1.

Amethyst Blizzard. Common. Action. Ice Elves. Deals 5 Magic damage to the opposing character +1 for each Frostbite in game. The damage dealt by this card is considered as a Water Spell.

Oath of friendship. Common. Action. Ice Elves. This character and another one of your characters have Attack +1 and Defense +1 until the end of the game. Berserker: if both characters have their Rage bonus, they heal 2 Health points.

Ayir. (3 evolutions in all). On its last evolution: Common. Mercenary. Berserker. Ice Elves. Spirit 2. Attack 7/8. Defense 2. Health points 15. Rage: “Ayir” changes appearance and the Magic and Direct damage points dealt by your Ice Elves is increased by one. Turns 2 and 5: a “Frostbite” is created and played after your cards have been already played.