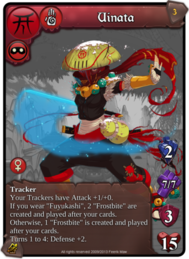 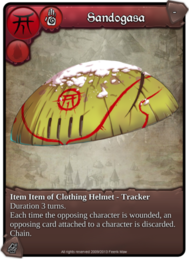 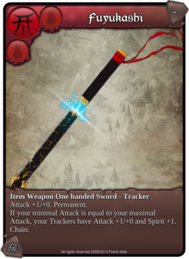 Fuyukashi. Uncommon. One handed Sword. Kotoba. Tracker. Attack +1/+0. Permanent. If your minimal Attack is equal to your maximal Attack, your Trackers have Attack +1/+0 and Spirit +1. Chain.

Shuriken. Uncommon. Item Other. Kotoba. Tracker. Attack +2. If this card is still attached to you at the end of the fight, it is placed in your Hand. Chain.