Celebrating the 5th anniversary of Eredan ITCG, we would like to thank you for your loyalty and your involvement.
Therefore, if you login between April 13th and April 20th at noon CET, you will get the exclusive card for the game’s fifth anniversary. 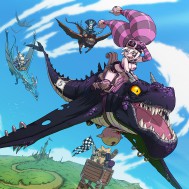 You will only be able to complete it during this time, after which it won’t be accessible anymore.
Win the trophy to get the exclusive card: “Amnezy riding on a Dragon” as well as 30% off the Newcomer boosters until April 20th at noon.

Amnezy riding on a Dragon. Marauder. Mercenary. Human. Mythical. Spirit 1. Attack 6/10. Defense 1. Health points 15. Dual Wield Dagger. Attack +1 against Warriors. Attack +1 against Humans. Turn 1: A “Dragon Torch” is created and played before your cards. Turns 2,4 and 5: your opponent becomes Mercenary until the end of the turn. 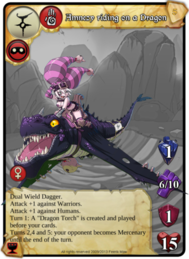 Starting today and until April 20th 2015 at 12:00 CET, the “Anniversary Booster” is available at the Store for 800 Fee’z.
It contains: 25 of the newest cards, including the Colossus “Amnezy’s Dragon”, 3 Rare (or Legendary), 8 Uncommon and 2 extra Destiny cards.

Amnezy’s Dragon. Colossus. Mercenary. Mythical. Spirit 3. Attack 7/11. Defense 3. Health points 30. At the start of each fight, pick a card in your Discard Pile, this card is played and then removed from the game at the end of the fight. Cannot chain any card. At the end of fight, you and your opponents suffer X direct damage points for each “Dragon Torch” attached to you. Turns 2, 3 and 4: A “Dragon Torch” is created and played before your cards. 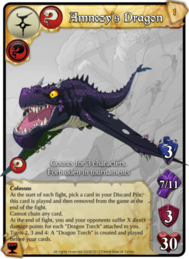