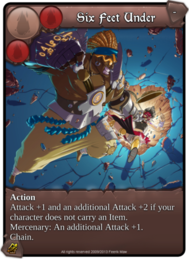 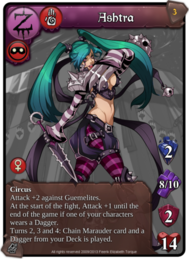 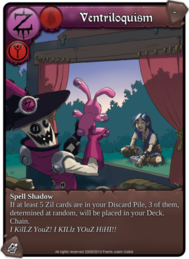 Ashtra. (3 evolutions in all). On its last evolution : Uncommon. Zil Warriors. Marauder. Human. Circus. Spirit 2. Attack 8/10. Defense 2. Health points 14. Attack +2 against Guemelites. At the start of the fight, Attack +1 until the end of the game if one of your characters wears a Dagger. Turns 2, 3 and 4: Chain Marauder card and a Dagger from your Deck is played.

Razor blade. Rare. Dagger. Zil Warriors. Marauder. Permanent. Dual Wield. +2 to physical and direct damage points dealt and suffered. At the start of the turn, Min. Attack +4 or Max. Attack +4 until the end of the turn.

Ventriloquism. Common. Shadow. Zil Warriors. Mage. If at least 5 Zil cards are in your Discard Pile, 3 of them, determined at random, will be placed in your Deck. Chain.