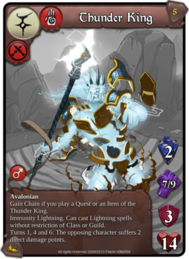 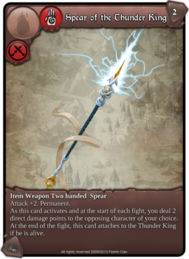 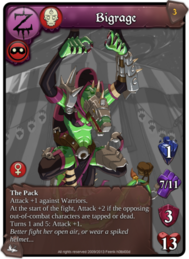 The following cards are reeditions of older cards that got an upgrade. We also added brandnew evolutions to the Thunder King and Bigrage!

Thunder King. (4 evolutions in all). On its last evolution : Rare. Mercenaries. Warrior. Human. Avalonien. Spirit 2. Attack 7/9. Defense 3. Health points 14. Gain Chain if you play a Quest or an Item of the Thunder King. Immunity Lightning. Can cast Lightning spells without restriction of Class or Guild. Turns 1, 4 and 6: The opposing character suffers 2 direct damage points.

Spear of the Thunder King. Uncommon. Spear. Warrior. Human. Attack +2. Permanent. As this card activates and at the start of each fight, you deal 2 direct damage points to the opposing character of your choice. At the end of the fight, this card attaches to the Thunder King if he is alive.

Bigrage. (3 evolutions in all). On its last evolution : Common. Zil Warriors. Marauder. Nature Guemelite . La Meute. Spirit 1. Attack 7/11. Defense 3. Health points 13. Attack +1 against Warriors. At the start of the fight, Attack +2 if the opposing out-of-combat characters are tapped or dead. Turns 1 and 5: Attack +1.

Armor of the Thunder King. Common. Armor. Warrior. Human. Defense +2. Permanent. Each time that a character deals magic damage towards you, he suffers 2 direct damage points. At the end of the fight, this card attaches to the Thunder King if he is alive.
These cards are now available in the Newcomers Booster.