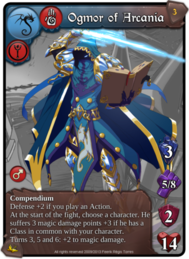 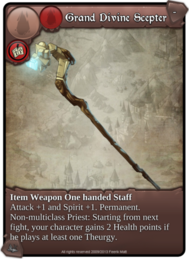 Ogmor of Arcania. (3 evolutions in all). On its last evolution : Rare. Noz’Dingard Envoys. Mage. Human. Compendium. Spirit 3. Attack 5/8. Defense 2. Health points 14. Defense +2 if you play an Action. At the start of the fight, choose a character. He suffers 3 magic damage points +3 if he has a Class in common with your character. Turns 3, 5 and 6: +2 to magic damage.

Soraya has been modified as follows: