When great magic powers are set free, this can open passages between different eras. Recently the thread of time became very instable and crossings to unsuspected times have been opened.

Nobody could predict the arrival of the dragons, those colosses whose existence was nothing but a mere hypothesis of a few archeologists. From this moment on, the diplomatic relations between the guilds were tense. Each one of them tries to negociate with these new sources of power, for whoever does not carry forward in their strategic plans might find themselves without defense when time has come.

“The Time of Dragons” is an event on Eredan iTCG in which you can obtain 9 dragon children, little pets who can be quite useful.

But this also is additional permanent content for the Adventure mode and the Clans. These dragons will continue to appear randomly and temporary even after the end of the event.

How can I get these offsprings?

With this Gold you can buy the offsprings of the dragons who will only be available during these 7 days. You can also use your Gold to place bids on the cards for the auctions.

During the event, the 9 dragons will alternate in the Adventure mode, each one appearing during one hour. Caution, these are very dangerous opponents! Prepare yourself well for the battle.

If you beat them, you loot cards and win a Gold bonus.

9 new Clan trophies are available, one for each dragon. If 30 members of your Clan manage to kill a dragon in less than 7 minutes, your Clan will get the according trophy and all clan members recieve the folowing new treasure: 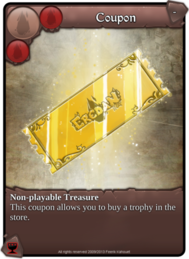 That’s right, organising raids with your Clan will allow you to activate act trophies in the store for free and get the hundreds available trophy cards!

After the event, the dragons will still appear on the Adventure mode map but not quite as frequently and the Clans can continue their raids on the dragons to get the coupons. Only the Dragon offsprings will not be available anymore.