From tomorrow onwards, the card release of November 6th will be withdrawn from the NewComer Booster! 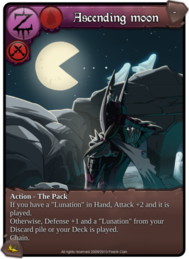 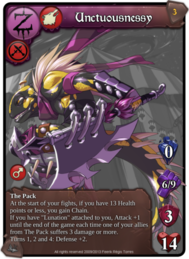 Sweet from Ïolmarek. Rare. Food. Desert Nomads. Duration 2 turns. At the end of your fights, for each character in fight, you win 1 Health point per increments of 4 damage that he has suffered, then this card is attached to one of your Eclipse allies untapped. Chain.

Ascending moon. Rare. Action. Zil Warriors. Warrior. La Meute. Permanent. If you have a “Lunation” in Hand, Attack +2 and it is played. Otherwise, Defense +1 and a “Lunation” from your Discard pile or your Deck is played. Chain.

Wild. (3 evolutions in all). On its last evolution : Rare. Zil Warriors. Warrior, Marauder. Beast, Shadow Guemelite . La Meute. Spirit 1. Attack 6/10. Defense 3. Health points 13. Attack +1 against Warriors. Every time one of your characters from The Pack suffers magic damage, he gains Attack +1 until the end of the game. Turns 1, 2 and 3: A “Lunation” is picked from your Deck and placed on one of your out of combat characters determined at random.

Unctuousnessy . (3 evolutions in all). On its last evolution : Uncommon. Zil Warriors. Warrior. Beast. La Meute. Spirit 0. Attack 6/9. Defense 3. Health points 14. At the start of your fights, if you have 13 Health points or less, you gain Chain. If you have “Lunation” attached to you, Attack +1 until the end of the game each time one of your allies from The Pack suffers 3 damage or more. Turns 1, 2 and 4: Defense +2.

Night run. Uncommon. Action. Desert Nomads. Marauder. If your opponent’s Defense in inferior to 6, his next card is discarded. Otherwise he has Defense -3. A “Sol’ra Eclipse” is created and played. Chain if an Eclipse character is tapped.

Chew bone. Common. Food. Zil Warriors. La Meute. Choose a character, he is tapped. For each one of your Volk Pets, an opposing card is discarded.

The Antares. Common. Action. Marauder. Attack +4. A “Sweet from Ïolmarek” attached to one of your allies is attached to you.

Observe the sky. Common. Destiny. Priest. Duration 3 fights. All the characters have Attack -3 and Spirit +1. At the end of each turn, one of your Allies has Attack +1 until the end of the game. Chain Priest card.