This week, we offer you to acquire a pre-built Deck that will make you experience a new game play style and get some of this week’s cards. You have until Sunday, December 15th, 8:00 PM (French time)to discover this “Raw Desolation” deck for 999 Fee’z. 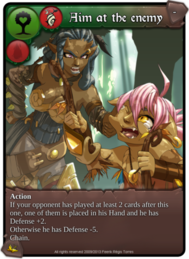 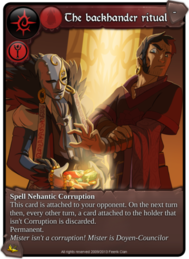 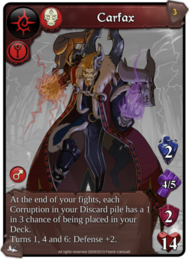 Aim at the enemy. Rare. Action. Sap Heart. Elfine. If your opponent has played at least 2 cards after this one, one of them is placed in his Hand and he has Defense +2. Otherwise he has Defense -5. Chain.

The backhander ritual. Rare. Corruption. Nehantists. Mage. This card is attached to your opponent. On the next turn then, every other turn, a card attached to the holder that isn’t Corruption is discarded. Permanent.

The black fairy’s Talisman. Uncommon. Jewel. Nehantists. You gain Nehant Guemelite. Permanent. As this card activates, if your allies are Nehantists or if they are dead, play a Spell from your Hand. Chain Sort.

Demonophobia. Common. Nehantic. Nehantists. Mage. Your opponent suffers 2 magic damage for each Corruption attached to him. You heal as much Health points as the number of damgae dealt that way.

Dorn. Common. Sword. Warrior. Activates after the fight. Attack +4 and this card becomes affiliated to your Guilds. Permanent. Chain.

Carfax. (3 evolutions in all). On its last evolution : Common. Nehantists. Mage. Nehant Guemelite. Spirit 2. Attack 4/5. Defense 2. Health points 14. At the end of your fights, each Corruption in your Discard pile has a 1 in 3 chance of being placed in your Deck. Turns 1, 4 and 6: Defense +2.