To celebrate the arrival of our new Dragon Knight, this week, we offer you to acquire a pre-built Deck that will make you experience a new game play style and get some of this week’s cards. You have until Sunday, November 10th, 8:00 PM (French time)to discover this back to this “Knights of the Dragon” deck for 999 Fee’z.

The cards reedited are: Rosary of Serenity, The warrior’s heritage, Dread, Trial on the Bridge, A just cause. 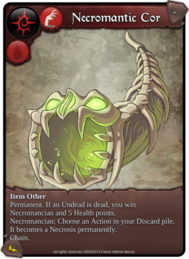 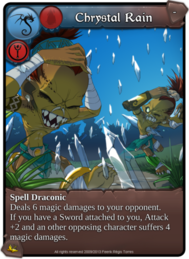 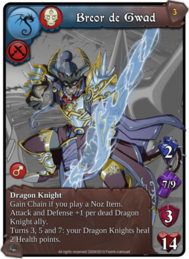 Necromantic Cor. Rare. Other. Nehantists. Undead. Permanent. If an Undead is dead, you win Necromancian and 5 Health points. Necromancian: Choose an Action in your Discard pile. It becomes a Necrosis. Chain.

Chrystal Rain . Rare. Draconic. Noz’Dingard Envoys. Mage. Deals 6 magic damages to your opponent. If you have a Sword attached to you, Attack +2 and an other opposing character suffers 4 magic damages.

Rosary of Serenity . Rare. Jewel. Kotoba. Duration: 2 fights. As this card activates, choose one card from your Discard pile, it is then placed in your Deck. Demon Hunter: -2 to damage points suffered by your character.

Paladin’s Aura. Uncommon. Action. One copy per character. Permanent. As this card activates and at the start of your fights, your Avalonians who have reached Level 7 or more have Attack and Defense +1 and gain Priest and the others gain Level 1 definitively. Chain.

The warrior’s heritage. Uncommon. Action. Sap Heart. Choose one of your other Warriors, he dies and your character has Attack +X where X equals the chosen character’s printed Min Attack. Hom’Chai : Defense +3.

Trial on the Bridge. Uncommon. Quest. Unique. Avalonien. At the end of the Turn, if the total sum of your characters’ levels is above 12, an opposing character determined suffers 8 direct damage, this card is then discarded. Permanent.

A just cause. Uncommon. Quest. Unique. Permanent. At the start of the turn, if one of your Avalonians has upgraded to level 6 or more, he heals 7 Health points and 5 opposing cards in play as well as this card are discarded.

Resuscitated Kuar. Common. Offensive. Nehantists. The maximum Health point limit of your (living or dead) Undead rises to 20 definitively. All your characters have Attack +4 and Defense +4. Duration 5 turns.

Gathering skulls. Common. Action. Nehantists. Undead. Defense +3. Duration 3 to 5 turns. At the end of each turn, an opposing character has Attack, Defense or Spirit -1. If this card is a Necrosis, this penalty lasts definitively.