To celebrate the arrival of our new Hom’Chaï, this week, we offer you to acquire a pre-built Deck that will make you experience a new game play style and get some of this week’s cards. You have until Sunday, September 22nd, 8:00 PM to discover the Immortality deck for 999 Fee’z. 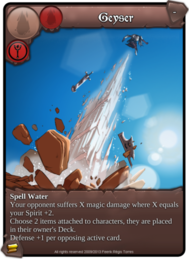 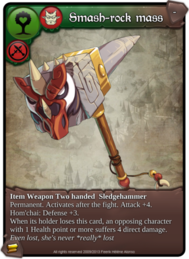 Sharpened pike. Uncommon. Spear. Warrior. Berserker. Activates after the fight. Permanent. Attack +3. If this card is discarded from the game, one of your Sap Heart has Attack +2 until the end of the game. Activates immediately if a Hom’chai is still alive.

The Burrower . (2 evolutions in all). On its last evolution : Uncommon. Sap Heart. Warrior. Hom’Chai. Spirit 0. Attack 7/9. Defense 3. Health points 16. Gain Chain if you play a Two Handed Weapon. When one of your Hom’chais dies, the others heal 2 Health points and have Defense +2 until the end of the game. After you have played your cards, you can choose one of your Hom’chais, he will die at the end of the fight. Turns 2, 4, 5 and 7: Defense +2 and Spirit +2.

Map of the subsoils . Uncommon. Scroll. Pirates. Nehantists. Sap Heart. Permanent. Each opposing character has Defense -1 or -2. You draw one more card during the draw phases and your opponent one less. Each other “Map of the Subsoils” is placed in its owner’s Deck.

Underground exploration. Uncommon. Action. Kotoba. Sap Heart. Warrior. Choose a character in battle. If it is your opponent, you have Attack +3, otherwise, Defense +4. Chain Item.

Landslide . Common. Earth. Mage. Duration 4 turns. The Stone Linkers have Attack and Defense +1. Choose a character and attach this card to him. He has Attack -6 and is tapped. At the end of each turn, he has Attack +2.

Underground mushrooms . Common. Other. Warrior. Priest. Craftsman. Duration 5 turns. At the start of each turn, if the holder of this card is the caster or one of his allies, he has Defense +1 or heals 1 Health point. Otherwise, he has Defense -1 or suffers 1 direct damage.