You had escaped from the prison of the Rusty Island when Kiria had slipped the leash. You had even managed to get to the former air base, the floating islands nearby without being caught. Yet, when you wake up where you were hiding, you see strange things flying in the sky: enemy ships!

You recognize a couple of them! What… what? You are totally stunned! In front of you are the Arc-Kadia, the Iron Titan, the Black Widow, the Megalodon and the The Firmament, all playing with their canons!

Weren’t they destroyed or damaged?

The one thing to do: use your artillery and destroy them all. That seems easy: they are there, just in front of you. It might not be that easy, in fact…

Indeed, the rascals have chosen the right moment to attack. There is so much fog that you have difficulties spotting them. Soon you will only see their burning pontoons touched by your shells.

Destroy all the ship waves and make sure you deserve your stripes!

What do you have to do?

You thought you could escape the powerful Bramamir fleet and thumb your nose at Admiral Al Killicrew? You are so surprised by a shooting attack from the pirates that you don’t have enough time to get to one of the ships, therefore, you manage the operation from the ground.

Your objective is to destroy all the ships that attack you by waves. For that, you need to use the canons on the coast, those that aren’t destroyed yet.

The enemy ships are lost in the mist and you can’t see them. Touch them and you will see their burning bridges in the distance.

– For each wave of 5 ships that you destroy, you win a random rare card.

– You start the game with 3 shells. Each trophy you win makes you gain 3 more. 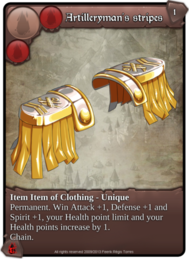 – Destroy 37 ships and win the collector card: Wave of panic. 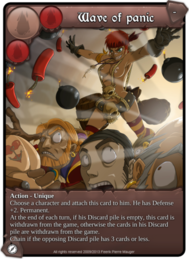 This is an exclusive evolution and you can only get it that way. 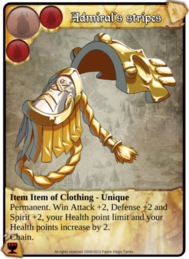 Once you have sunk 50 ships, keep on playing. For each wave you sink, you win a rare random card.

Where can I get shells?

Each time you finish a trophy, you get 3. You can handle all trophies simultaneously and they are repeatable.

Let’s unite all the Guem Land forces and fight these ship waves one after the other.
Destroy 20,000 ship waves to win the victory!
If you make it, at the end of the event, each player will receive 1000Xp and 1000Cx for each ship wave he has destroyed.