To celebrate the arrival of our new tsoutai, this week, we offer you to acquire a pre-built Deck that will make you experience a new game play style and get some of this week’s cards. You have until Sunday, September 15th, 8:00 PM to discover the Immortality deck for 999 Fee’z. 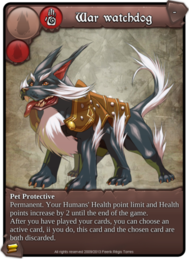 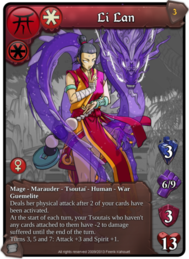 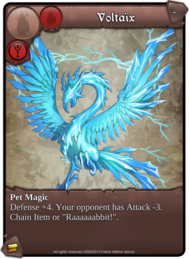 The Flawseeker’s Harmony. Rare. Action. Kotoba. Tsoutaï. Mage: Spirit +1. Marauder: Chain. War Guemelite: Defense +X where X equals your character’s Spirit. Human: Heals X Health points where X equals your character’s Spirit.
War watchdog . Rare. Protective. Human. Permanent. Your Humans’ Health point limit and Health points increase by 2 until the end of the game. After you have played your cards, you can choose an active card, ii you do, this card and the chosen card are both discarded.

Xianren. (3 evolutions in all). On its last evolution : Common. Kotoba. Mage, Marauder. Human, War Guemelite . Tsoutaï. Spirit 2. Attack 7/9. Defense 2. Health points 14. Attack +1 against Marauders and Warriors. Your Tsoutai have Spirit +1. At the end of the fight, your Tsoutai gain 1 Health point if they have a “The Flawseeker’s…” card attached to them. Turns 2, 3 and 5: Defense +1 and Spirit +1.


War Hawk. Common. Offensive. Sap Heart. Permanent. Choose an opposing character, it is tapped and has Defense -2. At the start of each turn, he has Defense -1. Elfine: Defense +2, Chain.

Power of the Flawseeker. Common. war. Kotoba. Mage. Tsoutaï. Duration 3 fights. Attack and Spirit +2. Once a turn, when you deal physical damage, Defense +3 until the end of the turn. Chain.

Protector Flawseeker. Common. Protective. Kotoba. Tsoutaï. Permanent. Defense +3 if your opponent is Marauder or Warrior and Spirit +3 if he is Mage or Priest. Counts as 2 “The Flawseeker’s…” cards. Chain.

White Volk. Common. Volk. Zil Warriors. Warrior. Duration 3 fights. Defense +1 per Volk pet and per Beast. Your characteristic penalties are ignored. At the start of an even turn, your “The Pack” heal 3 Health points. Chain.

Li Lan. (3 evolutions in all). On its last evolution : Common. Kotoba. Mage, Marauder. Human, War Guemelite . Tsoutaï. Spirit 3. Attack 6/9. Defense 3. Health points 13. Deals her physical attack after 2 of your cards have been activated. At the start of each turn, your Tsoutais who haven’t any card attached to them have -2 to damage suffered until the end of the turn. Turns 3, 5 and 7: Attack +3 and Spirit +1.