From tomorrow onwards, the card release of 15th May 2013 will not be available in the NewComer Booster! 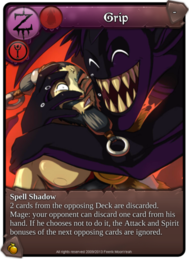 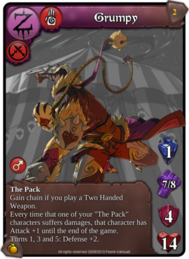 Grip. Rare. Shadow. Zil Warriors. Mage. 2 cards from the opposing Deck are discarded. Mage: your opponent can discard one card from his hand. If he chooses not to do it, the Attack and Spirit bonuses of the next opposing cards are ignored.

Grumpy. (2 evolutions in all). On its last evolution : Rare. Zil Warriors. Warrior. Human. La Meute. Spirit 1. Attack 7/8. Defense 4. Health points 14. Gain chain if you play a Two Handed Weapon. Every time that one of your “The Pack” characters suffers damages, this character has Attack +1 until the end of the game. Turns 1, 3 and 5: Defense +2.

Back to the wall. Uncommon. Action. Zil Warriors. Warrior. La Meute. Duration 3 turns. Attack -4 and Defense -4. Your “The Pack” allies have Attack +6 and Defense +6. Chain if you are wounded or if there is at least 2 other active Zil cards.

Fenrath’s Fit. Common. Action. Zil Warriors. Attack +2. The Pack: extra Attack +1 for each of your “The Pack” characters that are wounded or died. Chain Zil item.

Shadow’s Medallion. Common. Jewel. Duration 6 turns. As this card activates and at the start of your fights, if a character in the battle has a Shadow Spell attached to him, Defense +2 and Spirit +1.