To celebrate the arrival of our new Minotaur, we propose you this week a pre-builded Deck that will allow you to try a new playing style, obtaining some cards of the week. Come to discover until Sunday 14th July at 8 PM (French time) the deck “Tantad’s Phalange” for only 999 Fee’z. 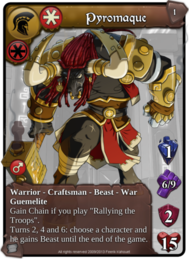 The Howls. Rare. Action. Zil Warriors. La Meute. This card becomes a Volk Pet (One pet per character). Permanent. You perform an additional Attack that equals the number of Volk pets in your possession +1 for each of your living Beasts. Chain.

Runic Lord Xenophon. (3 evolutions in all). On its last evolution : Rare. Runic Legion. Warrior. War Guemelite . Archonte. Spirit 1. Attack 7/9. Defense 2. Health points 17. Gain Chain if you play an Armor. If you only have one living Archon, your Runic Warriors have Attack +1. At the start of the fight, Attack +1 for every Cor Rune attached to your character. Turns 3 and 6: Attack +1.

Rallying the Troops. Uncommon. Action. Runic Legion. Warrior. Duration 3 fights. Defense +2 Cor Rune : your allies have Attack +2 and Defense +2. Nox Rune : Attack +1 for each Beast and you get the Beast Race.

Pyromaque. (2 evolutions in all). On its last evolution : Uncommon. Runic Legion. Warrior, Craftsman. Beast, War Guemelite . Spirit 1. Attack 7/10. Defense 2. Health points 17. Gain Chain and a Cor Rune if play “Rallying the Troops”. After you have played your cards, choose a card from your Discard Pile, and it will be placed in your Hand. Turns 2, 4 and 6: choose a character, he gains Beast until the end of the game.