Times goes by…inexorably…Today youg Lucian is not that young anymore. He lived many adventure with his companion Shana, Cristocat and Lady Jane, and this make him grow up a lot…He is almost a true man…..
Mera, through Lady Jane’s intermediary, challenged the young man: your future is unknown, many choises in front of you…don’t risk to take a too dangerous path! Acept my challenge and you will became a real adventurer…

Thie event starts now and will end on Thursday 30th May at Noon (Paris time).

Classes ArenaDuring this event, you must complete the 16 trophies that appear on your sceen, in order to collect Class Tokens. These 16 Trophies will be realized in a special room: the Classes Arena. Once you finished the 16 thropies you can start again and again the serie.

The Classes Arena is a special room where a player fight against another player. The feauture of this room is that it allows you to create special Deck with class restriction instead of guild restriction. The Deck must be composed by 3 characters of same class and 20 to 50 cards. You cannot use Deck with more than one class. This permit to mix character that otherwise cannot be mixed!

– Every trophy gives you one Class Token. Once you finished all the trophies you can start again, getting the Class Token associated with the Trophy. You can skip a Trophy by paying 99 Fee’z.

Awards:You can use your Class Tokens in Lucyan’s Shop in order to: :

– Buy a Surprise Booster . This Booster contains a card that can be Legendary, Rare, Uncommon, or can be a card from the past events. Price: 8 Class Token or 99 Fee’z. 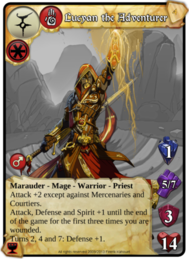 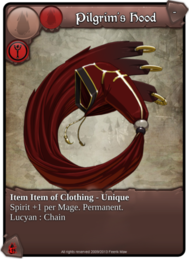 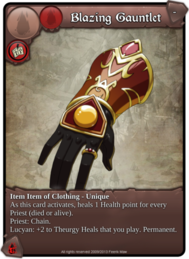 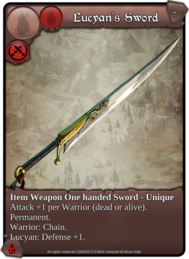 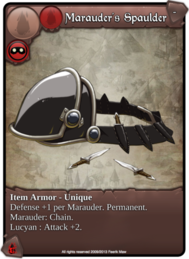 Lucyan the Adventurer : Mythic, Character,
Mercenaries, Warrior, Mage, Marauders, Priest, Human, Man.
Spirit 1. Attack 5/7. Defense 3. Health point 14. Attack +2 except against Mercenaries and Courtiers. Attack, Defense and Spirit +1 until the end of the game for the first three times you are wounded. Turns 2, 4 and 7: Defense +1.

Clan challengeFor clans, we propose you the following challenge:

Complete the highest number of trophies, and you can win: 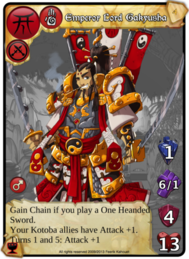