From tomorrow onwards, the card release of 20th March 2013 will not be available in the NewComer Booster! 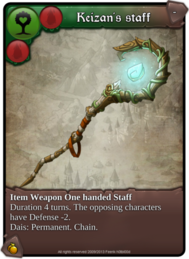 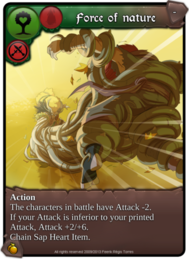 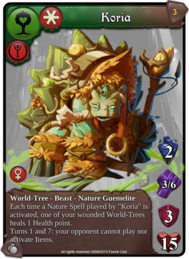 Force of nature. Rare. Action. Sap Heart. Warrior. The characters in battle have Attack -2. If your Attack is inferior to your printed Attack, Attack +2/+6. Chain Sap Heart Item.

Thorny body. Uncommon. Action. Sap Heart. Attack +2 to Attack +3 if your opponent has an Attack bonus. An additional Attack +2 if you haven’t played any card after this one. Chain.

Leather shoulder pad. Common. Armor. Sap Heart. Permanent. Defense +2. Mage: at the end of the fight, if you have less than 7 Health points, an additional Defense +1. Chain Weapon or Nature Spell.

Wolfish. Common. Action. Sap Heart. Attaches to your opponent. Duration 3 turns. Attack -2. At the start of the turn, Attack -1 and Spirit -1.