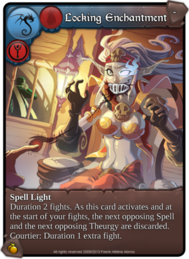 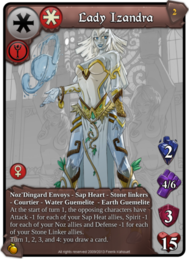 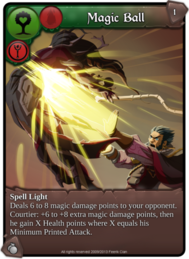 Locking Enchantment. Rare. Light. Noz’Dingard Envoys. Mage. Duration 2 fights. As this card activates and at the start of your fights, the next opposing Spell and the next opposing Theurgy are discarded. Courtier: Duration 1 extra fight.

Master Linker Cane. Uncommon. Staff. Stone linkers. Water Guemelite . Permanent. For each of your allies that have the same Guild as you, your opponent has Spirit -1 and -1 to damage dealt. Courtier: Chain. As this card activates, choose a card attached to a character and it’s discarded.

Savage Cloak. Common. Item of Clothing. Permanent. Your allies gain Guilds and Classes as yours. Courtier: your Warriors and Marauders have Attack +2 and Defense +2.

Venom Ring. Common. Jewel. Courtisan. Duration 2 fights. Your characters have Defense +1. As this card activates, the next Theurgies are placed in their owner’s Hands.

Dishonour on sale. Common. Action. Attack +1, Defense +1 or Spirit +1 until the end of the game. Courtier: Chain. At the end of the fight this card is placed in your Deck.

The following update has been added to 2 cards:

– The ability of Asajiro the Vagabond, level 2 and 3 has been amended: he can now attach only One Handed Kotoba Weapons form the deck, and not anymore any kind of One Handed Weapon.