In their trip they will take an object that belongs to a Knight-Witch of Dhun. He will try to recuperate his belong, and teach to these troublemakers adventurers that stealing is wrong.

Take part in this event since now on and until Thursday 2nd of May at Noon (Paris time).

This event is a chance to explore mysterious Donjons.

Every Donjons is composed by a map with 63 cases, with 6 hidden treasures. Start your exploration with a case of your choice. Once the associated task is completed, you can continue your exploration by choosing the adjacent case.

During your exploration, you will find monsters to defeat by following certain rules, challenges that must be solved in the game, and obtacles that will make you lose time.

You can pass to someone else the case by paying 39 Fee’z.

Once you get the 6 treasures you can pass to the following Donjon.

There are 2 ways to collect the treasures :

– 6 Treasures to be won in every Donjon. Once you finished the associated mission, you get automatically the treasure as reward.

What else can I obtain during this event?

You can use your treasures in the Store to buy :

– Newcomer Boosters. You can buy it only once you have already bought the Item Card Knight-Witch Medallion and one of the 2 characters (max 1 per player). Price : 8 Treasures. 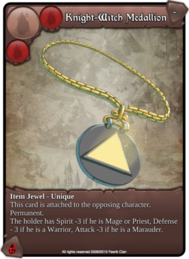 Knight-Witch Medallion : Collector, Item Jewel Item, Unique. This card is attached to the opposing character. Permanent. The holder has Spirit -3 if he is Mage or Priest, Defense – 3 if he is a Warrior, Attack -3 if he is a Marauder.

Knight-Witch Xeneelk : Mythic, Character, Mercenaries, Warriors, Mage, Unknown, Human. Spirit 2. Attack 5/5. Defense 3. Health 15. Gain Chain if you play a One Handed Weapon.
At the start of the fight, Attack +2 until the end of the game. If “Knight-Witch Medallion” is in your Deck, this card is played following the cards already played. Turns 1, 3 and 5: Attack +2, Defense +2.

Master Knight-Witch Xeneelk : Mythic, Character, Mercenaries, Warriors, Mage, Unknown, Human. Spirit 3. Attack 8/8. Defense 3. Health 35. Gain Chain if you play a One Handed Weapon.
At the start of the fight, Attack +2 until the end of the game. After you have played your cards, if “Knight-Witch Medallion” is in your Deck or attached to an opposing character, it is removed and played. Turns 1, 3 and 5: Attack +3 and Defense +3