You can take part in this trophy during that precise lapse of time, after that it will not be available anymore. You can also buy this trophy for 199 Fee’z and acquire the title and the card associated with it.

At the end of the fight, if the opposing character has a defense that is inferior to his printed defense, you score 1 point.

15 points per game maximum, you must play against different players.

You will earn the card named Errors of the past and the title: The Liberated. 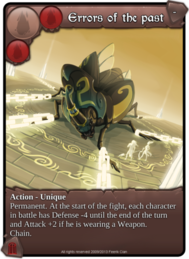 Errors of the past: Action. Collector. Unique. Permanent. At the start of the fight, each character in battle has Defense -4 until the end of the turn and Attack +2 if he is wearing a Weapon. Chain.