In their house of abysses, the Nehantic forces spend their time daydreaming… longing for the day on which when they will eventually launch an assault on the Land of Guem! The new Demon who has just appeared is named Bellicosity. Strolling around with his loyal Demonic ax and a whole army of Demonic Servants, he is ready to follow any of his invocator’s desires. 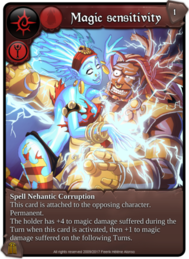 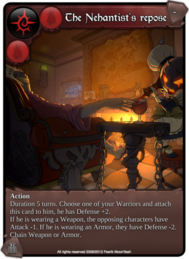 Chain if there is more than one Demonic Servant Pet in play.

Choose another Demon, he has Attack +1 and Spirit +2 until the end of the game.

The Nehantist’s repose. Uncommon. Action. Nehantists. Duration 5 turns. Choose one of your Warriors and attach this card to him, he has Defense +2.

The non Demon characters have Attack -1 and Spirit -1.

Bile-spitter . Common. Other Item. Nehantist, Warrior, Marauder, Demon. Permanent. Choose a character and attach this card to him, he has Attack -2 if he is a Demon.

As this card activates and at the start of the fight, your opponent has Attack -1 and Defense -1 until the end of the turn for each Demoniac Servant in play.

As Ourenos has been modified, he is available again in the NewComer booster.