From tomorrow onwards, the card release of October 31st, will not be available in the NewComer Booster. 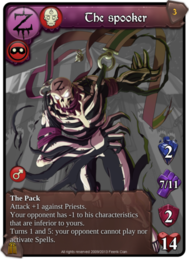 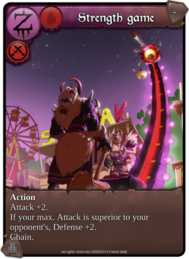 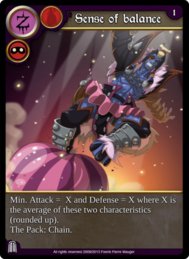 Toffee apple. Rare. Action. Duration 2 to 3 fights. This card is attached to the opposing character.

The opposing character’s characteristics that are lower than yours are reduced by 1.

Turns 1 and 5: your opponent cannot play any Spell.

Juggle. Rare. Action. Zil Warriors, Marauder. For each one of your characters who has a Dagger attached to him, an opposing character suffers 1 direct damage.

Attack +1 per character who has a Dagger attached to him.

Dexterity game. Uncommon. Action. Zil Warriors, Marauder. Choose an opposing character, he suffers 1 direct damage, +2 if you have a Dagger attached to you.

If your max. Attack is superior to your opponent’s, Defense +2.

Unhealthy attraction. Uncommon. Action. Duration 6 turns. Choose an opposing character and attach this card to him.

Each time the holder suffers damages, a card from the opposing Discard pile is placed in its owner’s Deck and one of his opponents heals 1 Health point.

Your characters have Attack +1 and Spirit +1. The other “Procession” cards in play are discarded.

Sens of balance. Common. Zil Warrior, Marauder. Min. Attack = X and Defense = X where X is the average of these two characteristics (rounded up).

Zwindle. Common. Action. Zil Warriors, Priest, marauder. Duration 4 turns. Your opponent discards a card from his Hand and can discard up to 3 others.

Circus: at the end of the fight, if he has more than one card in Hand, this card is attached to your opponent and he has Attack -5.

Caution: from next week onwards, the number of cards released every week changes from 10 to 7.