iTCG: the Night of the Witches

This year, Halloween is devoted to witches. Take up the gauntlet set up by witches and win exclusive cards!

You can take part in the event today and until November 5th 2012 at noon (French time).

Witches offer you to accomplish missions and will reward you with Pumpkins. You can get to the missions via the in-game background screen.

Once you have won all the missions, you win the Candy card and the title of Sorcerer/ Witch. 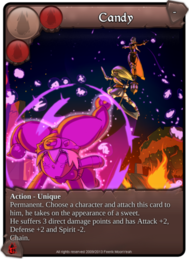 Candy: Collector. Unique. Permanent. Choose a character and attach this card to him, he takes on the appearance of a sweet.

By connecting, you received 4 Halloween masks. These give you the opportunity to achieve the different missions of this event.
If you want more masks (Ghosts, Vampire, Pumpkin or Witch), you will find 2 of them in each 12 card booster. What’s more, you have a 1 in 10 chance of obtaining an “Amnezy Mask”.

What can I obtain during this event?

You can spend your Pumpkins in the Witch’s store to:

– Buy the With Evil Intentions card. You can only buy this card once you have bought the White Witch or the Black Witch one. Cost 400 Pumpkins. 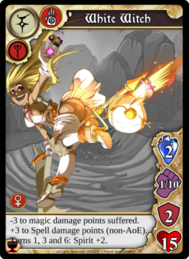 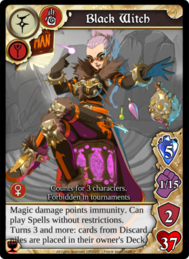 Turns 3 and more: cards from Discard piles are placed in their owner’s Deck.

With Evil Intentions. Mythical, Action. Unique. Permanent. The moment this card activates and at the start of each fight, your character takes on an emaciated or mangled appearance and the opposing character has Attack -1, Defense -1 and Spirit -1 until the end of the fight.