From tomorrow onwards, the card release of August 22th, will not be available in the NewComer Booster. 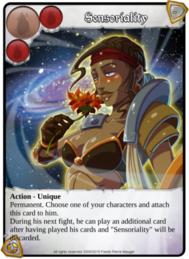 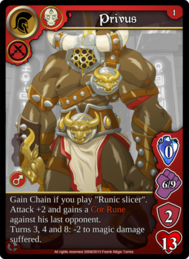 Sensoriality. Legendary. Action. Unique. Permanent. Choose one of your characters and attach this card to him.

During his next fight, he can play an additional card after having played his cards and “Sensoriality” will be discarded.

Cor Rune: each war Guemelite has Attack +1 until the end of the game and Attack +1 for each Cor Rune attached to him.

Nox Rune: Your Humans have Defense +1 for each Nox Rune attached to your characters.

Each time a card activates, if a character in battle has a Nox Rune attached to him, his caster becomes Runic.

Chain Theurgy if there is more than 3 Runes in play.

At the start of the turn, “Privus” and his last opponent are untapped.

Attack +2 and gains a Cor Rune against his last opponent.

Skirmish (and its two evolutions). Common. Action. Runic Legion. Gains a Yr Rune and Attack +X where X is the smallest of your characters’ Attack bonuses (+4 maximum).

The gods keep us…. Common. Action. Runic legion. Spirit +2. You characters have -2 to damage suffered. 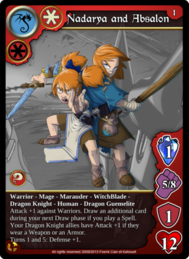 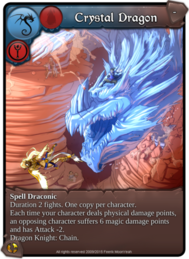 Your other Dragon Knights have Attack +1 if they have a Weapon or an Armor attached to them.

Draw an additional card during your next draw phase if “Nadarya and Absalon” play a Spell.

Each time your character deals physical damages, an opposing character suffers 6 magic damages and has Attack -2.

File the records. Uncommon. Action. Duration 2 turns. Choose a character and attach this card to him. He has Attack -2 and 3 cards from his owner’s Discard pile are placed in his Deck.

Witchblade: at the start of the fight, you can discard a card. The next card of the same type is ignored and placed in the opposing Hand.

Chain if one of your characters is dead.

Every other turn, if you have another living Dragon Knight, Attack +1 and Defense +1.

They both have Attack +1 and Defense +1 until the end of the game.

At the start of the fight, Spirit +1 until the end of the turn for each Spell played by one of the characters in battle.

Habits. Common. Action. Duration: 2 turns. Choose a character out of combat and attach this card to him. He has Attack -3 and -3 to magic and physical damages suffered.