From tomorrow onwards, the card release of July 25th 2012, will be removed from the NewComer Booster. 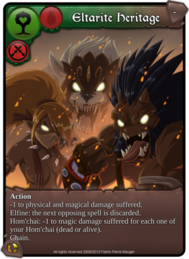 Eltarite Heritage. Rare. Action. Sap Heart. Warrior. -2 to physical and magical damage suffered. Elfine: the next opposing spell is ignored. Hom’chai: -2 to magic damage suffered for each one of your Hom’chai (dead or alive). Chain.

Diagonal fire. Rare. Action. Sap Heart. Duration 2 turns. Defense +2. Your Elfines have +1 to damages suffered. As this card activates, choose one of your characters out of combat who has a Bow attached to him. The opposing character suffers a physical Attack which equals the Min. Attack of the chosen character.

Choice of arms . Uncommon. Action. Sap Heart. Dais. Elfine. Attack +3 if you wear a Dagger, Defense +3 if you wear a Bow. At the end of the fight, the Weapons attached to your character are placed in your Hand. Chain.

Sharpened pike . Uncommon. Spear Two Handed Item. Warrior, Berserker. Activates after the fight. Permanent. Attack +3. If this card is discarded from the game, one of your Sap Heart has Attack +2 until the end of the game. Activates immediately if a Hom’chai is still alive.

Live in Harmony . Common. Action. Guemelite. Permanent. Spirit +1, Heals 1 Health point and -1 to damage suffered for each “Living in harmony” in play. At the start of the fight, this card is discarded. Chain. 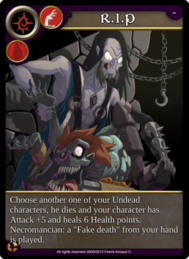 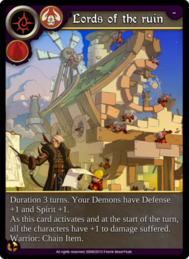 R.I.P. Rare. Action. Nehantist. Undead. Non-Mort. Choose another one of your Undead characters, he dies and your character has Attack +5 and heals 6 Health points. Necromancian: a “Fake death” from your hand is played.

Lords of the ruin. Rare. Action. Nehantist. Demon. Duration 3 turns. Your Demons have Defense +1 and Spirit +1. As this card activates and at the start of the turn, all the characters have +1 to damage suffered. Warrior: Chain Item.

Almaria. Common. Character.Nehantist. Warrior. Undead. Unknown. Spirit 0. Attack 6/9. Defense 2. Health points 18. +1 to damage suffered. Can no longer chain cards. After having played your cards, if you have a Necromancian who is still alive, choose a Necrosis in your Discard pile, it is played. Turns 3, 6 and 8: Attack -1/-3 and Defense +4.

Braiiiiiiin?. Common. Action. Nehantist, Undead. Non-Mort. Attack +2 to Attack +3. If this card is a Necrosis: Heals 2 to 3 Health points. This card becomes a Necrosis until the end of the game.

Old rag doll . Common. Other item. Permanent. Spirit +1 for each Item of Clothing in your Discard pile (4 maximum). Chain Spell or Theurgy.

Still alive?! . Common. Action. Demon. Duration 5 turns. At the end of the turn, if your character has suffered damages, he has Defense +1, and Attack +3 if he has suffered more than 6.