Battle of the guilds – Lottery

Battle of the guilds!

This week, the Sap heart and the Nehantists are fighting over the amber Corrupted blade.

Each time these two guilds meet during a player versus player game (except in the training room), the winner obtains points for his guild.

The gauge placed at the background of Eredan iTCG website lets you know about the ratio victory/defeat between these two guilds. The more the ratio increases the more its color straggles in the gauge (and pushes away the opposing color).

A victory cursor represents the place which the two guilds covet. To control it, a guild will have to straggle its color beyond the cursor in order to take the color of the guild! The first day this cursor is placed in the center of the gauge.

Each day, some points are brought into play. At noon (French Time), the guild who controls the cursor of victory obtains these points. Caution! At that precise moment, the cursor is replaced where the two colors meet.

Each guild must then obtain a better ratio than the day before to obtain the points of the day!

At the end of the battle, Tuesday July 31st at noon (French Time), the card ‘Grab the bounty’ will be affiliated to the guild which has obtained the highest score, that guild will also get a discount on its guild Booster!

NB: During this battle, a special tournament will take place, the registration will start at 3:00 AM / 3:00 PM / 9:00 PM. The restriction of this tournament which is like a “Challenge of the Council” is to play either a Sap Heart Deck, either a Nehantist one.

Corrupted. Rare. One handed Weapon Sword Item. At the start of the game, if all your characters are Warriors, “Corrupted” is placed in your Hand. Permanent. Attack +2 and -1 to magic and physical damages suffered. As this card activates, if your next card is a Weapon, it will activate immediately and the next opposing card is ignored. 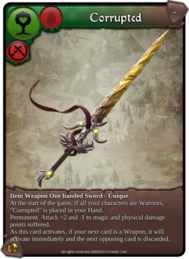 Each time you gain a victory which is important for the guild battle, you get a lottery ticket.
At the end of the battle we will pick 20 cards at random, the participants these tickets belong to will win the card Corrupted (one per person maximum).