It was pretty lively yesterday evening at the leaking cask inn. They were celebrating the “fête de la musique”! Psalm and his band, the Rock’n trolls made it groovy all night long while a crowd of uncontrollable drinkers celebrated the event accompanied by all sorts of bottles. But when he woke up this morning, Psalm realized that his favorite instrument, his harp had disappeared! The poor bard is totally desperate and as
his mind is somewhat befuddled, it’s hard for him to search. But he promised a private concert to the one who’ll bring him his harp back! 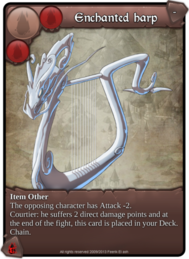 Enchanted harp: The opposing character has Attack -2. Courtesan: he suffers 2 direct damages and at the end of the fight, this card is placed in your Deck. Chain.