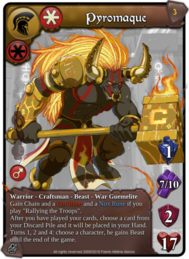 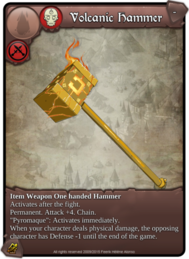 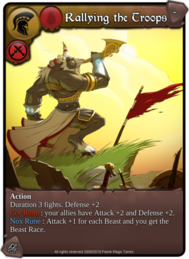 Pyromaque. (3 evolutions in all). On its last evolution: Uncommon. Runic Legion. Warrior. Craftsman. Beast. War Guemelite. Spirit 1. Attack 7/10. Defense 2. Health points 17. Gain Chain and a Cor Rune and a Nox Rune if you play “Rallying the Troops”. After you have played your cards, choose a card from your Discard Pile and it will be placed in your Hand. Turns 1, 2 and 4: choose a character, he gains Beast until the end of the game.

Rallying the Troops. Uncommon. Runic Legion. Action. Warrior. Duration 3 fights. Defense +2. Cor Rune : your allies have Attack +2 and Defense +2. Nox Rune : Attack +1 for each Beast and you get the Beast Race.