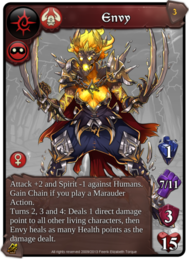 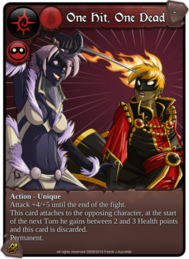 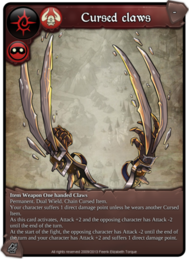 Envy. (3 evolutions in all). On its last evolution: Rare. Nehantist. Marauder. Demon. Spirit 1. Attack 7/11. Defense 3. Health Points 15. Attack +2 and Spirit -1 against Humans. Gain Chain if you play a Marauder Action. Turns 2, 3 and 4: Deals 1 direct damage point to all other living characters, then Envy heals as many Health points as the damage dealt.

The following cards are reeditions of older cards:

One Hit, One Dead. Rare. Action. Nehantists. Marauder. Attack +4/+5 until the end of the fight. This card attaches to the opposing character, at the start of the next Turn he gains between 2 and 3 Health points and this card is discarded. Permanent.