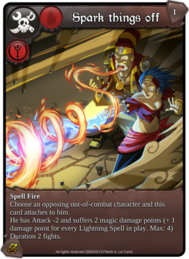 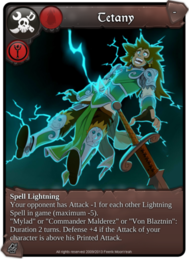 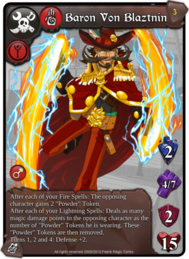 Spark things off. Rare. Fire. Pirates. Mage. Choose an opposing out-of-combat character and this card attaches to him. He has Attack -2 and suffers 2 magic damage points (+ 1 damage point for every Lightning Spell in play. Max: 4) Duration 2 fights.

Tetany. Uncommon. Lightning. Pirates. Mage. Your opponent has Attack -1 for each other Lightning Spell in game (maximum -5). “Mylad” or “Commander Malderez” or “Von Blaztnin”: Duration 2 turns. Defense +4 if the Attack of your character is above his Printed Attack.